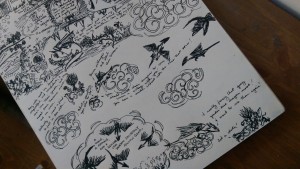 The little dragon agrees. They ask the great golden dragon what he is looking for in a mate.  He lists a bunch of things, then thinks and revises his answer: he’s actually looking to meet a friend to maybe fall in love with later.

This week, a couple of teenagers sheepishly approached me for help. They asked for help finding other teenagers to make friends with. I thought of Askani speaking through her dragon–to whatever extent an author speaks through her characters–and of many adults in my life, all essentially asking the same questions.

Of course, the answers differ depending on one’s age and location.

Of course, the answers remain mostly the same, since we’re all humans looking for meaningful connections with other humans.

The little dragon in the story suggested the big dragon to think of something he likes to do and go do that, both because he likes that thing (so it’ll bring him joy and engagement and confidence and a bunch of other intrinsically fulfilling / extrinsically attractive qualities) and because he will have a shared interest / easy conversation starter/ common experience with anyone he meets while doing that thing.

I’ve promised to research and blog about places for teens to hang out, do interesting things, and meet awesome other teens in NYC. It feels like an enormous task, because the city is so big. That said, I actually have the easy job. I just have to find and point out the possibilities. It’s up to the teens (and sometimes their parents) to step outside the school, and maybe their comfort zones, to “meet a friend to fall in love with.”