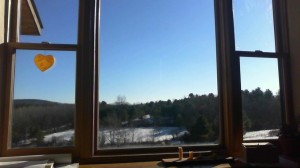 I’m curled up, warm in a sunny window, a little bit amazed at how much organized chaos filled the beginning of the week.

This weekend, I had a guest and a staff working day (in which @ryanshollenberger and @tomis gave the bathroom an amazing make-over!).

We rolled into the week Tuesday morning with the arrival of Cloudhouse at ALC-NYC! We packed that day so full of plans that I barely could fit everything on the weekly schedule board. I finished discussing The Alchemist with @failspy, watched @ryanshollenberger @kingthanos @failspy and @bear eat Ghost Peppers, documented an improv game @abram led called “Yes, Let’s” and a collaborative Blocks-Versus-Zombies minecraft mission and @failspy ‘s product development and @themadhatter DMing Werewolves and a new board game from @douglasawesome and lots of discussion of @timotree ‘s SkyRim game and and and and and…

Wednesday was less scheduled but equally magical (and less Ghost-pepper-sickness filled). I actually left early with the Cloudhouse crew, but during the day there was a discussion which turned into a Rubik’s cube tossing game. Which turned into monkey-in-the-middle. Which at some point turned into an Olympic-style competition. The teenagers’ laughter poured out of the library, where this all was happening, much to my delight.

Thursday I woke up in Chatham! *sigh*bliss*gratitude*smile* I’ve never visited Cloudhouse before, and I was excited to see the whiteboard walls in use. Even before morning meeting, I had committed to playing Go with Lily, playing MM, and taking a trip to No Bottom Pond. Bear’s friend Raine was visiting, too, so there were six of us to have a quick morning meeting and then disperse. Lily and I played Go twice, with Charlotte watching and making Go stone art beside us. Then we headed up to the farmhouse, where @themadhatter DM’ed MM for all of us. It was a pretty exciting game: Raine’s character found a treasury, @hatninja ‘s character had really useful and adaptable weapons, and @bear ‘s character could make trash tornadoes. My character was a huge bear, with shamanic powers 🙂

We left around noon for the pond. Milo and Jesse had commitments at Cloudhouse, so they didn’t come. Lily, Charlotte, Raine, Bear and I climbed into a car for a short ride…during which we spend a lot of time discussing the radio. When we arrived, it was a nice mini-hike through the snowy trees to get to our destination. Even though some of the smaller-legged folks got tired, they persevered, and we made it down to the very very frozen pond. As if sharing the calm, snowy nature with friends wasn’t delightful enough, I then got to watch both Lily and Charlotte overcome their fears of falling through the ice. By the time we had crossed the lake, they were jumping and sliding on their bellies like penguins. By the time we were headed back, they had made art, done spins, slid a lot, raced, made a human train, located underground springs by patterns in the ice, and laughed a lot. We trekked back to the car, then drove back to Cloudhouse just in time for afternoon meeting.

My evening continued by the fire with cooking, drawing, Bear singing, some acrobatics, and lots of tea. It ended with a decision to stay an extra day, which is why I’m writing from where I am now rather than a bus or a train 🙂

Today has been very quiet and reflective. It’s been the perfect contrast to the beginning of the week, and I’m enjoying it just as much. So far I’ve read and written and watched @hatninja begin a series of ten ranked battles in League of Legends. I just finished a game of Go with Lily and am watching her make art with the Go stones. Feeling grateful and grounded and at peace.