My parents moved to a new area when I was born. They were young first-time parents, and my mom especially was looking for community. They wanted community for themselves as humans looking for company and parents looking for advice, but also for my sisters (not yet part of the picture) and me as we grew up.

They joined a church and craft groups and a service organization; I remember the people from those spaces the same way I remember the neighbors they also built relationships with. As life flowed on, so did most of the faces and voices that surrounded my baby self. Three of the most notable exceptions are in this photo: 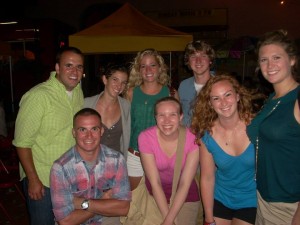 It’s already an old photo; Nicholas and Libby got married last year, Mihali is wherever the Marines have sent him, Michelle moved out west for graduate school. It’s also an incomplete photo. My youngest sister isn’t in it, nor are our parents or a few kids who were in and out of our circle over the years. But it’s the photo I have and it’s good enough. This is Playgroup.

Playgroup started before some of the people in it were born, but I don’t really remember those days even though I was there. Essentially, our moms wanted friends for themselves and playmates for us. So they were all, separately, joining “moms’ clubs” and “play groups,” until they found each other.

We still went to other “play groups” sometimes, but most of those didn’t last very long. The chemistry of this one…the culture that developed…This became Playgroup.

Why am I telling you all this? Am I just feeling nostalgic?

Not really…You see, Galactic Nemeses has been reintroduced to the space, and there are kids screaming at each other in the next room. I’ve asked them to quiet down, but they’re excited about a new game so I’ve settled for taking my aching head to a quieter room and closing the door.

When I breathe enough to transcend my aching head and release my desire for a quiet space, I want to laugh from appreciation and joy…also caused by the screaming. Because I hear in their commotion echoes of a world I once looked forward to joining more than I looked forward to any birthday or holiday. Playgroup was that world.

Once a month, we’d gather at someone’s house and rule the basement or playroom or yard. Interrupting the parents for any reason other than getting food meant we had to part ways earlier, so we were strongly motivated to keep our conflicts and noise out of the space where they were immersed in conversation. So long as we didn’t disrupt them, though, they left us to our own devices.

Sometimes we split into small groups to talk or play. Sometimes we created huge elaborate fantasy worlds that we all improvised stories in. We compared experiences with having siblings, losing teeth, going to school…with puberty and broken bones and crushes and dreaming.

And sometimes, when a really exciting new game with ambiguous boundaries was introduced, we’d enjoy getting super loud and emotional in some cinderblock room as we figured out how to play it together. And we could, because at the end of the day we knew that–however much we yelled (though we did watch what we yelled)–we were safe with each other.

That phase of integrating certain kinds of games never lasted long. It took a lot of energy and we all knew we were running the risk of attracting the adults’ attention, thus ending our time together for another month. We’d move on to other things, then return to the novel game as much calmer and more collaborative players.

Playgroup was one of the more significant experiences of my youth. I frequently tell NYC parents apologizing for their kids’ off-site-to-play-with-other-friends days that I fully support their decision, that I’m grateful my parents made sure my social world was more complex than just my classmates and immediate neighbors.

Having Playgroup every day would have been a dream. I wonder now at how much I learned from it just being there once a month! I used to swap books with Michelle and then we’d read them under our desks at school so we could discuss them next time we saw each other. Playgroup friends are the reason I became interested in languages and instruments. They were my introduction to Apples to Apples and Continue the Story and conflict resolution and balloon animals and and and…

Having Playgroup with a contract to make expectations clear, Change Up to address cultural shifts, and Culture Committee available for conflict resolution support? Woah. On the one hand, if our moms had had the intentional culture creation tools we have at ALC-NYC, they might have created communities they liked from other “play groups” and so my Playgroup family might never have met. On the other hand, if we’ve managed to stay connected and nurtured for over twenty years just in the culture that happened to come from us, imagine what we could have created together if we’d tried.

As I finish writing, the screaming here has quieted (after…three hours?). There was a brief episode where the Galactic Nemeses negotiators burst into the hallway and played a live-action game, and now they’re back at the joysticks…much quieter (though still super excited) astronauts and aliens than they were.

I shake my head at the familiar pattern and wonder how many of them will know each other in twenty years. I suspect that even if they don’t, they’ll be grateful to have known each other. Just as I’m grateful to witness these days of their being and becoming…headaches and all.