Last Thursday morning, most of the ALC-NYC crew headed towards East Harlem for a day of philosophy, visitors, Japanese, wrestling, music, and more.

Meanwhile, I texted with my co-conspiritors and packed a notebook into my field trip bag.

Learning is natural and happening all the time.

I’m generally a fan of our foundational principles at ALC, but the first one (above) is my favorite. As soon as we stop pretending that learning only happens through schooling, we get to start thinking about the kinds of experiences we want contributing to our education. Which means field trips. In this case, it meant a day trip to Philadelphia with Douglas, Javair, and Geva.

All three were still a bit tired after a long weekend in Boston for MIT Media Lab’s Virtual Reality Hack-a-thon (where they were finalists!), but Javair’s imminent departure made them all determined to pack as much as they could into their last few days collaborating in person. They’d met my friend Nick McGill over Maker Faire weekend, when he was trend-spotting and they (well…Douglas…) were talking game-design. They enjoyed picking his brain, and when I mentioned that the company he works for, Bresslergroup, was holding a debate on the nature of innovation, they made clear that both the content and the company interested them. So off we went.

Having two wonderful co-facilitators this year means I can do things like spend whole school days off-site with two kids and a parent. We got a decently early start, and managed to arrive in Philly just in time to have lunch with Nick. When he went back to work, we walked over to the Franklin Institute to check out their Robot Revolution exhibit. We compared robotic “hands,” played Tic-Tac-Toe, and scrambled a Rubix Cube. I particularly liked the wall-climbing robot that was designed to mimic a lizard. Douglas was more interested in the robotic baby seal, while Geva and Javair competed to catch the eye of a face-tracking Robotis. Then I listened while they discussed the wheels and programming of the soccer bots. I…couldn’t really follow. But I did get to share the pendulum and walk-through heart with them after we left the robots! 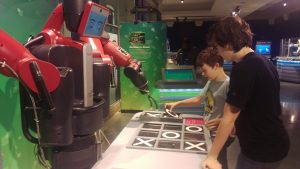 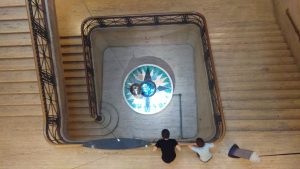 The doors for the Bresslergroup event opened around 6. We headed over a little early, hoping to get a glimpse of Nick’s workspace. Can’t really write about what we saw, but our tour inspired lots of excitement and questions. Curious to see how long it takes before I’m handed a wishlist for our Makerspace 😉

After our tour, we headed to the lobby for the great debate. Douglas picked front-row seats for us, and I ended up sitting across the aisle from my crew. Watching their faces was as much fun as listening to the debate, but I was eager to hear their thoughts on our journey home…especially since they voted for different sides at the end.

Innovation: driven by research or technology? Do you invest in seeking to understand your customer base’s wants and needs? Or do you presume they can’t know to ask for a tool they can’t imagine, so you invest in developing new technologies? The question got us talking about the nature of both creativity and of markets. Like a good debate question, it gave us lots to consider as we reflected on the evening.

Douglas voted for Team Research at the end of the evening. He made clear that his vote was not necessarily aligned with his personal opinion; rather, he explained that he heard Team Research make multiple sound arguments to support their side, where he heard Team Tech stick mostly to one argument. He really enjoyed the “quips” and pleasantly competitive banter from both teams, though he mentioned that he’d have preferred moderation that prioritized point-counterpoint discussion over polling of participants for each question.

Javair voted for Team Technology, in large part because he agreed that you have to create a product for people to interact with before you can research [using technology] how they receive it. He really appreciated the dynamic between the teams and the distinct contributions of each individual.

In the end, we agreed with the debaters that Research and Technology are interdependent. Since we play in alternative education, we touched on the evening’s assumption that we value innovation and have the courage to pursue it, one way or another. It’s an assumption that holds true for all of us, but we agreed it’d be interesting to discuss what it takes to get someone to that starting point. And what did we decide is necessary for those interested in innovation? Douglas said that a willingness to compromise and incorporate others’ ideas, without losing your vision, is invaluable in general and particularly helpful when collaborating on new projects. Javair advised that aspiring innovators choose questions and causes they feel passionately about so that they can stay motivated to persevere through challenges. He also cited the creation story of the video-game Prison Architect to support Douglas’ idea that willingness to adapt plans and change direction opens space for surprise successes.

Our verdict on the evening all in all? We arrived back in NYC happily exhausted and plotting our next Philly trip. Hopefully there’ll be more engineering adventures for us soon! 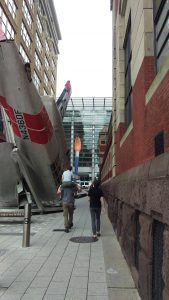 *I intentionally tried not to mention people’s ages, to avoid inviting assumptions about their knowledge and capabilities. I also left out much of what Geva and I had to say about the debate…mostly because it’s much more fun and interesting focusing on young people’s voices.